The Importance of Observing Guru Purnima

The auspicious day of Guru Purnima, also referred to as Vyasa Purnima or Vyasa Puja takes place in the Hindu month of Ashada or Ashara (between the months of June and July). It also commemorates the birthday of Ved Vyasa, who is credited to have authored some of the most important Hindu texts of all times such as the Puranas, Mahabharata and Vedas.

The day is dedicated to the Guru -sansktrit word meaning the one who dispels darkness and removes ignorance.

Who is True Guru?

Guru or teacher has always been considered akin to a God and universally accepted by all as the enlightened soul.

The lines above mean that when Guru(teacher) and Govind(The Almighty) are both standing in front of the shishya(student), whose feet should he touch first? He thinks he will touch the feet of his Guru first as he is the one who enlightened the shishya about Govind and led him to the Almighty.

A Guru, as mentioned is the dispeller of darkness of ignorance and illiteracy; who awakens the intelligence, wisdom and awareness of a shishya and leads the him to enlightenment. A Guru is patient and teaches his disciple a moral and ethical lifestyle focused on regular meditation, right actions, thoughts, and truth. We learn many lessons in our lifetime and anyone who provokes insight irrespective of age, gender, caste, religion or status is a guru, a master.

The Story of Guru Purnima

According to the Hindu mythology, nearly 15,000 years ago a yogi appeared in the high regions of the Himalayas. Nobody knew where he came from but everyone felt his holy presence and gathered around him.

He was meditating, neither he moved nor he talked. The only signs of life he showed were the occasional tears of ecstasy that streamed down his face.

Everyone was mesmerised seeing his capabilities.

Eventually every one of the onlookers left except seven of them, who stayed. 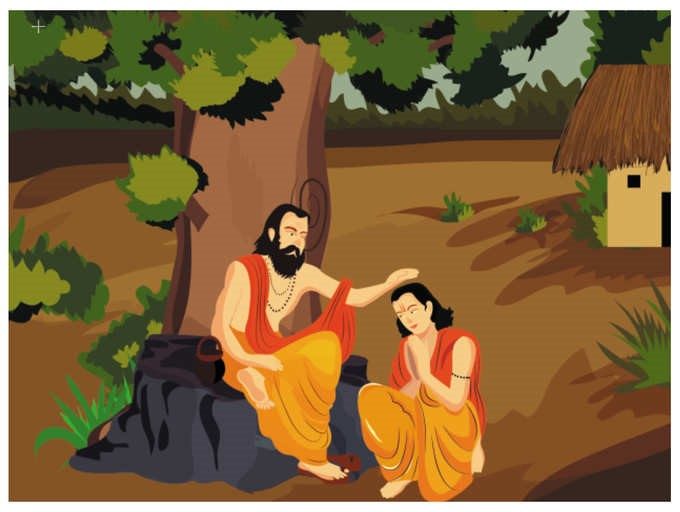 LWhen he finally opened his eyes, the seven pleaded him to teach them his ways, wanting to experience what he was experiencing. He dismissed them, but they persevered. Finally, he gave them a simple preparatory step and closed his eyes again.

The seven men began to prepare. Days rolled into weeks, weeks into months, months into years, but the yogi’s attention did not fall upon them again for another eighty-four years.

Upon awakening on the summer solstice that marks the advent of Dakshinayana, it was apparent to the yogi that the seven had become shining receptacles, ready to receive the teachings of enlightenment.

On the next full moon day, he faced the seven as a teacher. Thus, the Adi Yogi -the first yogi became the Adi Guru– the first teacher. The Adi Guru was none other than the great Vyasa and thus came the names Vyasa Purnima and Vyasa Puja.

To learn anything in life we need a teacher/master/guru who can show us the path. A guru is one who is enlightened and a shishya is the lamp to be lighted. Without the knowledge and the teachings of the teacher we would be hapless about most things in life. We do learn by our mistakes and our survival instincts but learning through a teacher is a more thorough process, more structured. Moreover, there are many subjects that are completely unfathomable or inexplicable without the teacher’s guidance. A Guru builds the ability of the disciples by encouraging and enlightening as a mentor/guide throughout their lives.

For people who are on the spiritual path, Guru Purnima is the most auspicious day in the year because they want to receive the grace of the Adi Guru and every other guru on the way. Guru Purnima or Vyasa Purnima is the day to celebrate, show our gratitude and pay our tribute to our Gurus.

Our Mission:
To impart an integral education that consists of physical, social, intellectual, emotional, and spiritual development of the child by implementing the latest pedagogical techniques and achieving brilliant learning outcomes.